Are you a healthcare provider interested in spreading the word about reducing breast cancer risk?

Join this esteemed list of health care providers who are spreading the word about reducing breast cancer risk!

Become a Partner in Prevention! Your name will be listed below and you'll receive free PDFs of our patient fact sheet and colorful waiting room poster.

A substantial body of research has shown that lifestyle factors contribute to the risk of developing breast cancer and influence outcomes after a breast cancer diagnosis. The following guidelines aim to put this knowledge to work, helping individuals to protect their health.

1. The more your diet is built from healthful plant-based foods, the lower your risk of getting breast cancer or having it come back.

Easier weight control. Achieving a healthy body weight reduces the risk of postmenopausal breast cancer and reduces the likelihood of cancer recurrence. In observational studies, plant-based (vegan) diets are associated with healthier body weights, compared with diets including meat and/or dairy products. In the Oxford cohort of the European Prospective Investigation to Cancer and Nutrition (EPIC), the mean BMI among meat-eaters was 24.4 kg/m2 for men and 23.5 kg/m2 for women; among those avoiding animal products, the corresponding figures were 22.5 kg/m2 for men and 22.0 kg/m2 for women.1 In a U.S. cohort, the differences were more striking. In the Adventist Health Study-2, including 60,903 men and women 30 years of age and older, the mean BMI among meat-eaters was 28.8 kg/m2, compared with 23.6 kg/m2 for those avoiding meat, dairy products, and eggs.2 Similarly, clinical trials with overweight individuals have shown that plant-based foods predictably cause weight loss.3

Healthful hormone levels. Estrogens play critical roles in breast cancer initiation, promotion, and progression.5 Higher blood estradiol concentrations are associated with increased risk of postmenopausal breast cancer.6 In clinical trials, high-fiber, low-fat diets have been shown to reduce estradiol and estrone concentrations by roughly 10 to 25 percent,7,8,9 with a similar effect on urinary estrogens.10 In part, this may be due to weight loss. To the extent that high-fiber, low-fat diets reduce body fat, they may also reduce estrogen production. In addition, dietary fiber interrupts enterohepatic circulation of estrogens, so that they are excreted, rather than being allowed to circulate in the bloodstream.

Special cancer-fighting properties. Apart from their fiber content and low fat content, certain plants appear to be particularly beneficial for reducing cancer risk. This appears to be true for vegetables as a group. In the EPIC Italy study including more than 31,000 women with a median follow-up of 11 years, those in the highest quintile of vegetable consumption were 35% less likely to develop breast cancer, compared with the lowest quintile. Within this food group, green leafy vegetables (e.g., salad vegetables, chard, and spinach) emerged as particular contributors to the protective association.11 In the Pooling Project of Prospective Studies of Diet and Cancer, combining data from 20 cohort studies including 993,466 women with follow-up periods ranging from 11 to 20 years, women consuming the most vegetables had 18 percent lower risk of developing estrogen receptor negative breast cancer, compared with women consuming the least vegetables.12 The effect of vegetable consumption on other forms of breast cancer was less clear.13,14 The apparent benefit of vegetables may be due to their content of folate and other vitamins, the ability of cruciferous vegetables to induce phase 2 enzymes that assist in the removal of carcinogenic chemicals, or to other effects of natural phytochemicals in vegetables.

Soy products, and the isoflavones they contain, appear to reduce breast cancer risk. A 2013 meta-analysis included results from 22 prior studies. Among Asian women, high isoflavone consumption (compared with the lowest consumption) was associated with a 32 percent reduction in breast cancer risk; a protective effect was observed for both pre- and postmenopausal cancers.15 A 2014 meta-analysis reached similar conclusions.16 Among Western women, there is very little soy consumption, making comparisons between high and low consumption more difficult.

Isoflavones may reduce estrogen biosynthesis and are under study for their antiproliferative, antioxidant, anti-angiogenesis, and anti-inflammatory properties.

It should be acknowledged that there is a widespread misunderstanding regarding soy’s effects on cancer risk, largely stemming from ambiguous results of animal and in vitro studies, which has been addressed by the human studies summarized in the meta-analyses cited above.

Healthful replacements for animal products. Consumption of certain animal products, such as red and processed meats (sausage, bacon, turkey bacon, ham, hot dogs, and deli slices),19,20,21 and eggs,22 is associated with breast cancer risk. For example, a 2018 meta-analysis of 15 studies showed that those with the highest (versus lowest) consumption of processed meats had a 9 percent higher risk of breast cancer.20 These products are easily replaced by plant-based alternatives.

Also, among women previously diagnosed with breast cancer, consumption of high-fat dairy products is associated with increased mortality risk. The Life After Cancer Epidemiology study included 1,893 women previously diagnosed with early-stage invasive breast cancer. After a median follow-up of 11.8 years, those consuming one or more servings of high-fat dairy products (e.g., cheese, ice cream, whole milk) daily had a 49 percent higher breast cancer mortality, compared with those consuming less than one-half serving daily.23 To the extent these products are replaced by plant-derived foods, risk is likely to be reduced.

The mechanistic links between animal products and breast cancer relate to their content of saturated fat;24 natural and synthetic estrogens;25 heme iron, which may encourage oxidative damage to DNA;26 nitrates and/or nitrites, which promote the formation of carcinogenic N-nitroso compounds;27 and carcinogenic polycyclic aromatic hydrocarbons and heterocyclic amines, which form when meat is cooked.28,29

Exercising women have lower levels of circulating estrogens, compared with sedentary women,30 although this benefit may be partly due to weight loss from exercise.31,32 Exercise can also strengthen immune defenses, which may help the body eliminate cancer cells that arise. Insulin resistance and high fasting insulin are linked to breast cancer risk; physical activity can improve these parameters.13,33

3. The less alcohol you consume, the lower your risk.

Alcohol consumption increases breast cancer risk.34 For premenopausal women, each glass of wine consumed per day increases the chances of developing breast cancer by about seven percent. Two glasses a day increase a woman’s risk by fourteen percent, and so on.13 The same is true for other alcoholic beverages. A bottle of beer, a five-ounce glass of wine, or a shot of liquor all have about the same alcohol content. For older women, the effect is amplified. For each drink a postmenopausal woman consumes daily, her risk of breast cancer increases by about thirteen percent.13

Alcohol’s effects may relate to its ability to increase sex hormone levels and contribute to DNA damage.35,36

4. The closer you are to a healthy weight, the lower your risk of breast cancer after menopause.

Excess body weight increases the odds of developing postmenopausal breast cancer.37 In the Nurses’ Health Study, heavier women (BMI above 30 kg/m2) were found to be 47 percent more likely to develop breast cancer, compared with those with a BMI under 23 kg/m2.38 This finding may relate to body fat’s ability to produce estrogens. In fat cells, the aromatase enzyme converts androstenedione and testosterone to estrone and estradiol, respectively.

Adiposity is also associated with increased circulating insulin and leptin and reduced plasma concentrations of sex hormone-binding globulin (a binding protein that keeps sex hormones inactive), all of which may play a role in breast cancer risk.39

It should be noted that, prior to menopause, women with extra body fat have a lower risk for breast cancer than thinner women. However, after menopause, breast cancer becomes far more common (80 percent of all breast cancer in the U.S. occurs in women over 50 years old),40 and overweight women are at a much greater risk. Excess body weight is also associated with a worse prognosis in women diagnosed with cancer.41 Carrying extra weight into mid-life is also linked to diabetes, hypertension, heart disease, and other health problems, so maintaining a healthy weight—that is, a body mass index (BMI) of 18.5-24.9 kg/m2–is beneficial at every age. Following the previous three steps—choosing plant-based foods, exercising regularly, and limiting alcohol—all facilitate attaining and maintaining a healthy weight. 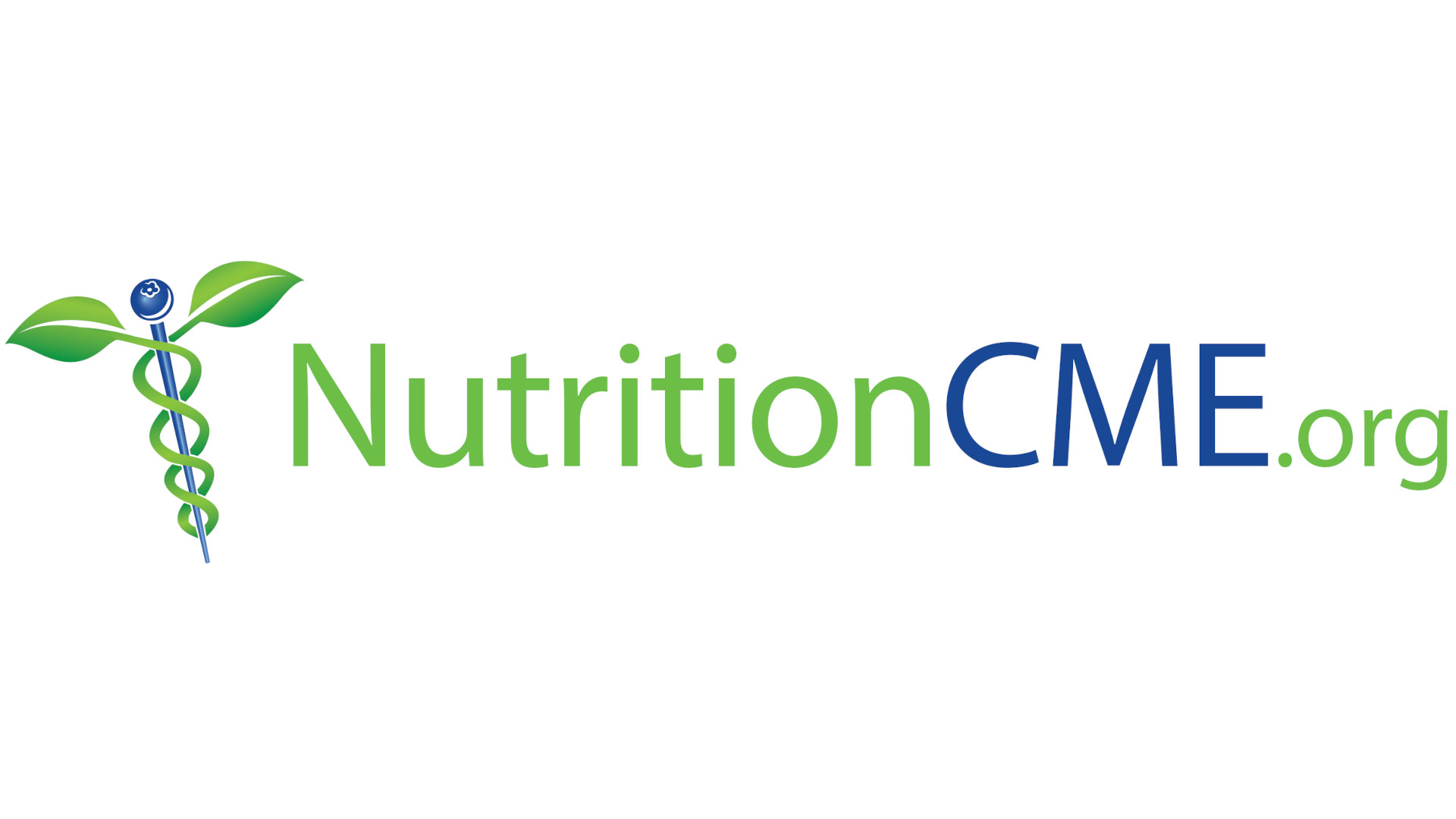 Support the Let’s Beat Breast Cancer campaign with a T-shirt that promotes the health benefits of a plant-based diet.