There Is No Safe Amount of Processed Meat

The World Health Organization has determined that processed meat is a major contributor to colorectal cancer, classifying it as “carcinogenic to humans.” Just one hot dog or a few strips of bacon consumed daily increases cancer risk by 18%. The World Cancer Research Fund (WCRF) and the American Institute for Cancer Research (AIRC) have also found that “the evidence on processed meat and cancer is clear-cut.”

“Processed meat refers to meat that has been transformed through salting, curing, fermentation, smoking, or other processes to enhance flavor or improve preservation. Most processed meats contain pork or beef, but processed meats may also contain other red meats, poultry, offal, or meat by-products such as blood. Examples of processed meat include hot dogs (frankfurters), ham, sausages, corned beef, and biltong or beef jerky as well as canned meat and meat-based preparations and sauces.”

Eating a hot dog takes away 36 minutes of healthy life (good-quality and disease-free life) according to a study that evaluated more than 5,800 foods and ranked them by their nutritional disease burden. 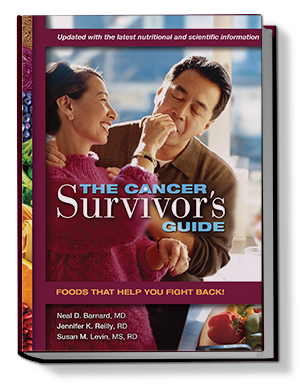 Find out how foods fight cancer and the advantages of a high-fiber, low-fat, dairy- and meat-free diet. Includes updates from the latest research, special prostate and breast cancer sections, tips for making the dietary transition, and more than 130 recipes.

Beans and other high-fiber foods satisfy hunger more than meat.

Hot Dogs Are Hazardous to Your Health

Break Up With Bacon

Wise Beyond Her Years

Processed meats cause colorectal cancer, and rates are rising among young people.