Good news for the 30 million students served by the National School Lunch Program!

Earlier this week, a federal court struck down a recent attempt by the United States Department of Agriculture to weaken school nutrition standards. The plan would have relaxed sodium limits and weakened whole grain requirements.

The Physicians Committee for Responsible Medicine submitted an amicus brief urging the court to reject the plan due to the harm it would cause to students.

These steps are especially critical at a time when one in five children have abnormal cholesterol levels, most do not eat enough fruits and vegetables, and less than 1% eat a healthy diet—habits that are exacerbating the childhood obesity and diabetes epidemics and setting students up for future heart disease.

Increasing the availability and promotion of fruits and vegetables in the school meals that are served to tens of millions of children each day could help protect against these diseases. In fact, researchers from the Cleveland Clinic found that obese children who followed a plant-based diet focused on fruits, vegetables, and whole grains lowered their blood pressure and cholesterol levels and improved their weight.

The plant-based entrees contained triple the amount of heart-healthy fiber and more iron, calcium, and vitamins A and C, compared to standard school lunches. They also contained less total and saturated fat and no cholesterol.

Plus, students enjoyed the entrees (several of the items are still on the menu today!), and plate waste did not exceed the national school food waste average.

So rather than lowering school lunch standards, the USDA should encourage school districts to try out some of the case study’s methods—including taste tests, posters, and giving entrees engaging names—that helped increase acceptability of fruits, vegetables, beans, and other healthy foods.

Despite the USDA’s current plan, the good news is that more and more schools are choosing to up the fruits and veggies on their menus. Approximately 14 percent of school districts across the U.S. offered plant-based options in 2017, which was up from 11.5 percent just the year before.

Throughout the country, students are digging into delicious plant-based options like veggie salad bowls and three-bean vegan chili in Los Angeles, quinoa with roasted veggies and edamame in Capistrano, Calif., and falafel with rice and locally grown farm-fresh apples in Ithaca, N.Y.

Lawmakers are taking notice. California and New York have recently introduced legislation that would help schools serve more plant-based lunches. If the USDA had students’ best interests at heart, it would also be finding ways to provide them more healthy school meals.

Maggie Neola, RD, LD, is a staff dietitian with the Physicians Committee for Responsible Medicine. 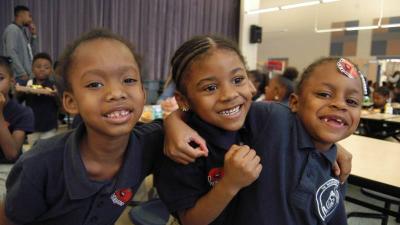