Dietary confusion just reached a whole new level. The Dietary Guidelines Advisory Committee has just announced it is backing off suggesting that traces of cholesterol in foods pose a health risk. The idea is that its effect on blood cholesterol is less dramatic, compared with saturated fat—so maybe an egg here or there is no worse than an occasional drag on a cigarette. Coupled with recent reports questioning how bad “bad fats” really are, many people are unsure what to believe.

Let’s clear up the confusion. Here are the facts, starting with cholesterol: Cholesterol is not the same as fat. Fat is the white streak in a steak and the grease that dribbles out of a drumstick. But cholesterol is invisible. Cholesterol particles are found in the membranes that surround the cells that make up an animal’s body. Cholesterol is in all animal products and is especially abundant in the lean portions of meats. There are also loads of cholesterol in eggs, cheese, and shellfish, such as shrimp and lobster. Cholesterol in these foods causes your blood cholesterol level to inch upward.1 The cholesterol-raising effect is not as strong as that of bacon grease and other saturated-fat-laden products, but it is still there. Especially for people whose diets are modest in cholesterol to start with, adding an egg or two a day can cause a noticeable worsening on a cholesterol test. Some people make a point of saying that cholesterol in foods is not as bad as saturated fat in foods. Maybe, but the issue is academic, because the two travel together. Fat and cholesterol are the Bonnie and Clyde of the culinary world. An egg, for example, has a whopping 200 milligrams of cholesterol and gets nearly 20 percent of its calories from saturated fat. They conspire together to raise your cholesterol level. But most foods from plants—vegetables, fruits, beans, and grains—have virtually none of either one. Okay, so what about fat? Is it really a health problem or not? The short answer is yes, it’s a problem. “Bad” fat—that is, saturated fat—raises your blood cholesterol level and increases your risk of health problems, including heart disease and Alzheimer’s disease. Saturated fat is found in meats, dairy products, eggs, and coconut and palm oils. Trans fats—the partially hydrogenated oils used in some snack foods—are bad, too, and people who avoid these products do themselves a favor. Some news reports have mistakenly suggested that saturated fat isn’t really so bad after all. The confusion came from statistics: Studies that compare people who indulge in “bad” fats with those who generally avoid them clearly show fat’s tendency to boost heart risks. But studies where fat intake does not vary much from person to person do not show much effect. For example, a Finnish study in which most all the participants followed high-fat diets was unable to detect any benefit of avoiding “bad” fats—largely because there was no group in the study that actually avoided them. A 2014 meta-analysis combined all the studies—the good ones and the not-so-good ones—and concluded that, if you jumble the data together, the dangers of “bad” fat are no longer clear.2 The study was widely quoted by food writers who saw it as an excuse to try to rehabilitate pork chops’ reputation. The meta-analysis had another problem. It used adjusted statistics that downplayed the dangers of saturated fat. One of the studies it used was Harvard’s Nurses’ Health Study.3 In the original study, a high saturated fat intake boosted heart disease risk by 52%. But the numbers were then adjusted for protein intake, cholesterol intake, and other factors, and these adjustments made the dangers of “bad” fat hard to see. It’s a bit like studying whether alcohol causes car accidents. If you alter the statistics to compensate for whether people weave as they drive or have blurry vision, the relationship between alcohol and accidents can be made to disappear. So the answer is not to tuck into a hunk of bacon. The answer is to look at good studies, and they clearly show the risks of fatty, meaty diets. And what’s that about Alzheimer’s disease? In a 2003 study, the Chicago Health and Aging Project reported that people eating the most saturated fat had a higher risk of developing Alzheimer’s disease, compared with people who avoided “bad” fat.4 So the bottom line is that “bad” fat and cholesterol are as bad for you as ever. The products that harbor them—meat, dairy products, and eggs—are best left off your plate. People following plant-based diets have healthier body weight, better cholesterol levels, lower blood pressure, and much less risk of diabetes.5-7

Hot Dogs Are Hazardous to Your Health 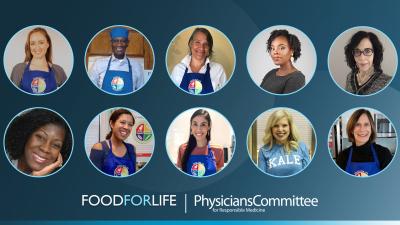