5 Good Takeaways from the 2020-2025 Dietary Guidelines for Americans

The Physicians Committee is demanding that the newly released 2020-2025 Dietary Guidelines for Americans be retracted and reworked to delete dairy promotion, avoid equating “protein” with meat, and increase emphasis on plant-based foods. But there are a few recommendations in the Guidelines that Americans should follow to help promote good health.

Physicians Committee: The World Health Organization has determined that processed meat is a major contributor to colorectal cancer, classifying it as “carcinogenic to humans.” Just one hot dog or a few strips of bacon consumed daily increases cancer risk by 18%. Eating 50 grams of processed meat daily also increases the risk of prostate cancer, pancreatic cancer, and overall cancer mortality. Those who consume the most processed meat also have an increased risk of death from cardiovascular disease, according to a National Institutes of Health study of more than half a million people.

Physicians Committee: Diets high in saturated fats, trans fats, and cholesterol—found in meat, dairy products, and eggs—raise cholesterol levels, which increases heart attack risk. Foods high in saturated fat are especially dangerous because they can trigger the body to produce extra cholesterol. Studies have found that plant-based diets lower cholesterol levels more effectively than other diets. Following a Physicians Committee campaign including petitions, oral testimony, billboards, and threat of legal action, the final 2015-2020 Dietary Guidelines for Americans, which were released in early 2016, rejected the egg industry’s efforts and strengthened recommendations for Americans to limit cholesterol consumption.

​​​​​​“Because beans, peas, and lentils have a similar nutrient profile to foods in both the vegetable group and the protein foods group, they may be thought of as either a vegetable or a protein food when aiming to meet recommended intakes.”

Physicians Committee: The evidence shows that diets high in animal protein can be deadly. A recent study found that higher intakes of animal protein increased the risk of premature death. Another study found that participants who ate the most animal protein had a fivefold increase risk of death related to diabetes. Plant protein is the safest and most beneficial source for good health. A study published last year found that replacing red meat with high-quality plant proteins such as beans, nuts, or soy may be associated with a reduced risk of coronary heart disease.

“More than 90% of women and 97% of men do not meet recommended intakes for dietary fiber. This aligns with intake patterns where fruits, vegetables, and whole grains are underconsumed by more than 85% of adults.”

Physicians Committee: Fiber in vegetables, fruits, beans, and whole grains helps with digestion, weight loss, heart health, and cancer prevention. It can even increase your lifespan. Meat and dairy products contain no fiber—it’s found only in plant foods. While most people get only 10 to 15 grams of fiber a day, the Physicians Committee recommends 40 grams per day.

​​​​​​“Replacing processed or high-fat meats with beans, peas, and lentils would have … benefits, as well as increasing dietary fiber, a dietary component of public health concern.” 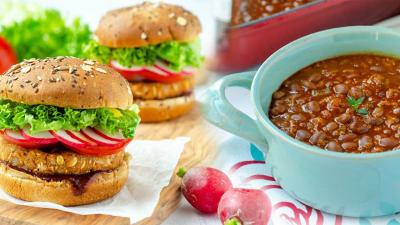