WASHINGTON: The Physicians Committee for Responsible Medicine—the nonprofit representing more than 12,000 physicians—announces that all surveyed medical schools in the United States and Canada no longer use animals for medical training. The University of Tennessee, the last remaining school to use animals, now joins all other programs in the United States and Canada in using human-relevant training methods like advanced medical simulators.

On June 24, in an e-mail forwarded to John Pippin, M.D., F.A.C.C., director of academic affairs at the Physicians Committee, the interim dean for the University of Tennessee College of Medicine in Chattanooga Robert C. Fore, Ed.D., F.A.C.E.H.P., C.H.C.P., writes that, “effective immediately,” the school will no longer use live pigs to teach surgical skills to students. The school’s most recent surgery clerkship began Monday, June 27.

“With the decision by leaders at the University of Tennessee College of Medicine to eliminate animal use in the Surgical Skills Laboratory, we are entering the post-animal era in medical student education,” says Dr. Pippin. “Like Johns Hopkins University a month before and numerous other medical schools before that, the University of Tennessee has acknowledged that simulation and other nonanimal teaching methods have supplanted the cruel and unnecessary use of live animals in the training of physicians.”

None of the 44 surveyed medical schools that have opened in the U.S. since 1979 have used animals to train students. Despite this standard among new medical schools, the majority of schools in the U.S. offered live animal laboratory sessions as recently as 1994, using dogs, pigs, or other animals. The Physicians Committee for Responsible Medicine identified the need to modernize medical education and began work on the issue in 1985. Now, all medical students trained in the U.S. will receive an education that is based on human anatomy and physiology, giving new doctors the skills they need to care for human patients.

Previously, medical schools used dogs, pigs, and other animals to teach physiology, pharmacology, and surgical skills. Students were instructed to inject the animals with various drugs to monitor responses and/or make incisions into the animal’s abdomen to insert lighted cameras and surgical instruments to practice procedures. After the training session, the animals were killed.

The elimination of animals for medical student education has been facilitated by the advent of interactive and programmable simulators that replicate human anatomy. These lifelike simulators are considered superior to animal-based education because they are modeled after the human body and allow for repeated practice. 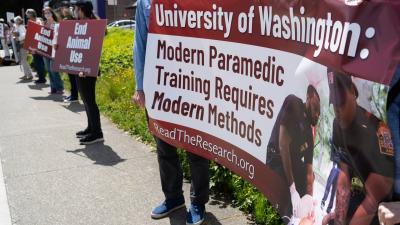