NEWARK, N.J.—New Jersey-based physician Saray Stancic, MD, has led a successful campaign to persuade University Hospital to reduce patient exposure to bacon cheeseburgers and other foods linked to life-threatening conditions including diabetes and heart disease. In early April, the hospital’s CEO, Shereef Elnehal, MD, confirmed that the Burger King at University Hospital has closed. The restaurant had been providing artery-clogging burgers and shakes to visitors, patients, and staff for about 25 years.

For the successful campaign, Dr. Stancic teamed up with the Physicians Committee—a nonprofit with more than 12,000 doctor members, including 495 in New Jersey. In 2019,

a protest led by Dr. Stancic and other health professionals confronted the Burger King and got the attention of the Hospital’s incoming CEO, Dr. Elnehal. A Change.org petition initiated by Dr. Stancic gathered 3,151 signatures. Dr. Stancic, a former chief medical resident at University Hospital, urged the hospital to comply with the Healthy Food Options in Health Care Facilities policy issued by the American Medical Association (AMA).

“The departure of greasy fast food from University Hospital is a win for visitors, patients, and staff,” says Dr. Stancic, of Bergen County, New Jersey. “Several life-threatening conditions are linked to high-fat fare like bacon cheeseburgers. The hospital should provide tasty, plant-based options that can speed recovery as well as prevent and even reverse diabetes, heart disease, and high blood pressure.”

In 2017, Dr. Stancic and the Physicians Committee obtained Burger King’s contract with the hospital through New Jersey’s Open Public Records Act. The doctors contacted University Hospital to point out that the contract probably ended in 2021. Although there was internal dissent, the hospital ultimately chose to end its relationship with the fast-food chain rather than create a new contract or go to month-to-month rental as allowed by the original contract.

Several hospitals have gone fast food free in recent years including Grady Memorial Hospital in Atlanta, which closed its McDonald’s in 2016. A list of hospitals that have closed fast-food restaurants is posted at www.MakeHospitalsHealthy.org.

Dr Stancic discusses the Burger King controversy in her book What’s Missing From Medicine and her documentary Code Blue. 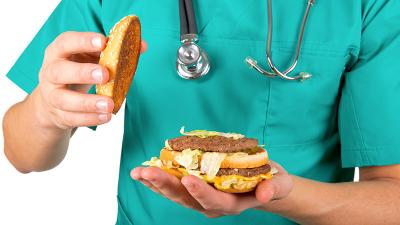