The DGAC made the recommendation during a June 17 webcast previewing the draft of its scientific report, which is expected to be finalized by the end of June. The U.S. Department of Agriculture and Department of Health and Human Services will use the DGAC’s report to develop the 2020-2025 Dietary Guidelines for Americans.

A report published in JAMA last year found that dietary cholesterol—and eggs specifically—raise the risk for heart disease and death. Researchers from Northwestern University analyzed data from almost 30,000 participants with an average follow-up time of 17.5 years. They found that each 300 mg dose of dietary cholesterol was associated with an increased risk for cardiovascular disease and mortality by 17% and 18%, respectively. When it came to eggs, each half egg caused a 6% and 8% increased risk, respectively. The authors urge the reviewers of the Dietary Guidelines for Americans to consider these findings in their next update.

“What has changed is that we now have published evidence showing how egg-industry-funded studies attempt to downplay the dangers of cholesterol,” adds Levin.

Last year Physicians Committee researchers published a review in the American Journal of Lifestyle Medicine that found industry-funded research has inappropriately downplayed the effects of egg consumption on cholesterol levels. Researchers examined all research studies published from 1950 to March of 2019 that evaluated the effect of eggs on blood cholesterol levels and examined funding sources and their influence on study findings. Research published prior to 1970 showed no industry influence on cholesterol research. The percentage of industry-funded studies increased over time, from 0% in the 1950s to 60% in 2010-2019. More than 85% of the research studies, regardless of funding sources, showed that eggs have unfavorable effects on blood cholesterol. Industry-funded studies were more likely to downplay these findings: 49% of industry-funded publications reported conclusions that conflicted with actual study results, compared with 13% of non-industry-funded trials.

In 2016, the Physicians Committee filed a lawsuit against the USDA and HHS, alleging that the government had allowed the food industry and financial inducements to dictate the 2015 DGAC's recommendation that cholesterol is no longer “a nutrient of concern for overconsumption.”

Cholesterol-free vegan diets have been shown to reduce cholesterol levels. In 2017, Physicians Committee researchers reviewed 49 observational and intervention studies that compared vegetarian and vegan diets with omnivorous diets and their effects on plasma lipids. The greatest benefit on lipid levels was seen in those who followed vegan diets.

The doctors group also praises the DGAC for recommending cutting saturated fat, found mostly in animal products, and recognizing that fruits, vegetables, and grains are the most beneficial components of a healthful dietary pattern for reducing the risk of several chronic diseases, including heart disease, type 2 diabetes, and bone health.

Earlier this year, the Physicians Committee released the following recommendations for the 2020-2025 Dietary Guidelines:

The detailed recommendations are available at PCRM.org/DietaryGuidelines. 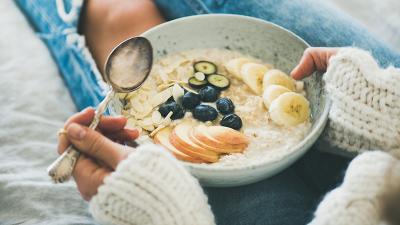