WASHINGTON—The nonprofit Physicians Committee for Responsible Medicine is calling on the U.S. Department of Agriculture to halt and retract a deceptive advertisement, which first appeared in The Wall Street Journal on Aug. 14, that downplays the beef industry’s devastating impact on the climate crisis. The advertisements are paid for by the Beef Checkoff, which is overseen by the USDA and is designed to stimulate beef sales and consumption. The Physicians Committee will also submit a petition with the Federal Trade Commission requesting an investigation into the advertisements.

“When you began your second appointment as Secretary of Agriculture, you committed to focusing on climate-friendly agricultural practices. Today, we ask that you to follow through on that commitment and use your authority to cease the series of deceptive USDA advertisements, paid for by the Beef Checkoff program, that downplay animal agriculture’s role in the climate crisis,” wrote Susan Levin, MS, RD, CSSD, director of nutrition education, in a letter to Secretary of Agriculture Tom Vilsack. “We ask that you replace these deceptive advertisements with helpful notices that promote replacing animal products for plant-based diets to improve both climate and human health.”

The letter cites research from the World Health Organization that says, “Reducing livestock herds would also reduce emissions of methane, which is the second largest contributor to global warming after carbon dioxide.”

A study published earlier this month that evaluated more than 5,800 foods and ranked them by their impact on the environment found that beef has the largest carbon footprint.

Research shows that simply replacing beef with beans could help the United States reach targeted greenhouse gas emission reductions. Researchers compared simulated net emissions of legume production, subtracted those from average beef production rates, and used U.S. reduction goals for 2020 as a reference. Based on the results, legume substitution could account for 46-74% of the required reductions.

It would also improve human health. A study published in July found that consuming 50 grams per day of processed meat and red meat—about the size of a hot dog—increases the risk of cardiovascular disease by 18% and 9%, respectively.

“But better than replacing meat with beans is replacing meat with a vegan diet,” writes Levin in her letter to the USDA. She cites a report published in The Lancet in 2019 that states that “vegan and vegetarian diets were associated with the greatest reductions in greenhouse-gas emissions.”

In April, the Physicians Committee demonstrated in front of the USDA calling for “beans not beef” for the health of the environment and humans. 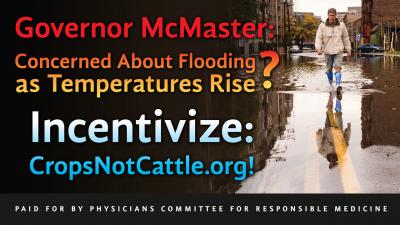