The comments provide input on FDA’s strategy for “Modernizing the standards of identity to provide more flexibility for the development of healthier products, while making sure consumers have accurate information about these food products.”

In June, Gottlieb explained his concerns: “In addition, if we believe consumers are being misled by the use of these terms in a way that could adversely affect their diets, we might set out a process to develop new guidance that would identify terms that might confuse consumers about a product’s ingredients or nutrients. The agency continues to seek information on these issues. For example, we need to more closely examine whether certain almond- or soy-derived products should be able to call themselves milk.”

The Physicians Committee also argues that courts have consistently rejected Gottlieb’s notion that consumers are misled by the names of plant milks. In a 2013 case involving WhiteWave Foods, which makes nondairy milks, a federal district court explained, “Moreover, it is simply implausible that a reasonable consumer would mistake a product like soymilk or almond milk with dairy milk from a cow.” In a 2017 case with Blue Diamond Growers, which makes almond milk, the court concluded that “[b]y using the term ‘almond milk’, even the least sophisticated consumer would know instantly the type of product they are purchasing.”

In July, Gottlieb added, “You see the proliferation of products like soy milk and almond milk calling themselves milk, and if you look at our standard of identity there is a reference somewhere in the standard of identity to a lactating animal, and, you know, an almond doesn’t lactate, I will confess. And so the question becomes, ‘Have we been enforcing our own standard of identity?’ The answer is probably not.” FDA defines “milk” as “the lacteal secretion, practically free from colostrum, obtained by the complete milking of one or more healthy cows.”

“Almonds don’t lactate, but they do produce milk,” says Mark Kennedy, Esq., vice president of legal affairs for the Physicians Committee. “Commissioner Gottlieb should follow the law and abandon his plan to change FDA’s enforcement of the definition of milk.”

Dairy Does Not Protect Against Bone Fractures in Menopausal Women 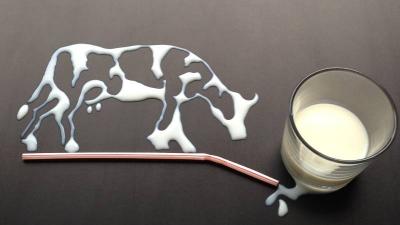