The company says it conducted a scientific study over 10 nights with 100 participants who ate the Nightmare King—a quarter pound of beef, a chicken fillet, cheese, bacon, mayonnaise, and onions on a green sesame seed bun—before they went to bed. Nightmares increased after eating the sandwich.

Of course, nightmares aren’t as scary another sleep-related consequence of fatty animal products: sleep apnea, which can be caused by obesity and is linked to high blood pressure, type 2 diabetes, and other health conditions. A recent study found that participants who consumed high-fat diets experienced more severe sleep apnea compared to those who consumed diets with less fat. More than two servings of dairy a day and processed meat intake also worsened symptoms.

But rest easy, a plant-based diet can provide sweet dreams. One study found that diets rich in fiber and low in saturated fat can lead to deeper, more restorative sleep. It’s not uncommon for people who have improved their diets to report that they feel energized during the day and sleep better at night. When reporter Jere Downs traded greasy burgers and fries for green smoothies and chickpea sandwiches on a vegan challenge, she reported that her “sleep is deep and uninterrupted. My eyes pop open at 6 a.m.”

So nix the Nightmare King and try our Good Night’s Sleep Garbanzo Bean Burger instead. 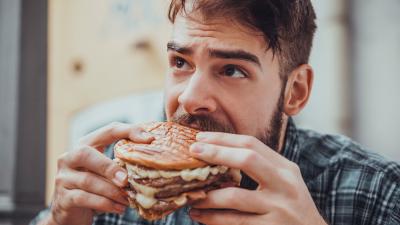