It’s National School Lunch Week from Oct. 11 to 15. Share these resources, recipes, and videos with your local schools to encourage them serve students healthy vegan lunches.

More and more students want vegan school lunches because they are concerned about the environment, their health, and animals. And schools are starting to listen: Approximately 14% of school districts across the U.S. offered vegan options in 2017—up from 11.5% in 2016.

That’s good news for students, many of whom may already have elevated cholesterol levels and are not getting enough fruits and vegetables. Research shows that half of U.S. children and adolescents do not have ideal cholesterol levels, and 25% are in the clinically high range, a risk factor for developing heart disease later in life. A healthy diet focused on fruits and vegetables reduces cardiovascular risk factors in children, according to a recent study. But only 7.1% of U.S. adolescents eat the federally recommended servings of fruit per day, and only 2% consume the daily recommended servings of vegetables per day.

Vegan school lunches contain triple the amount of heart-healthy fiber found in standard entrees, according to a Physicians Committee case study. Physicians Committee dietitians and researchers partnered with D.C. Central Kitchen to pilot six vegan entrees at a K-8 school in Washington, D.C. The entrees featured engaging names such as Veg Out Chili and Powered Up Pasta and met all National School Lunch Program nutrient requirements. The vegan entrees had zero cholesterol, compared with an average of 54 milligrams in the standard entrees. The vegan dishes also had more iron, calcium, and vitamins A and C, and less fat and saturated fat, compared with the standard entrees.

Vegan school lunches aren’t just good for students; they are good for the environment, too. A report from Friends of Earth found that if all school districts in California swapped out a beef burger for a black bean burger just one day per month, it would reduce greenhouse gas emissions as much as taking 22,000 cars off the road for one year!

Learn more about the benefits of plant-based school meals at HealthySchoolLunches.org. 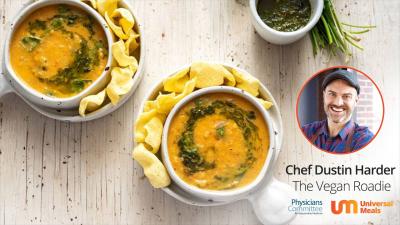 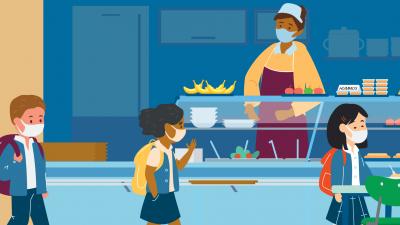