HOUSTON—The McDonald’s restaurant in Ben Taub Hospital, which closed last year due to flooding from Hurricane Harvey, will remain closed. The McDonald’s was located in the hospital’s basement, and according to the Houston Chronicle, “Ben Taub suffered flooding in a number of basement areas Aug. 27, [2017], the day Harvey's heaviest rains fell.” Since the flooding, Physicians Committee—a nonprofit of 12,000 doctors—has contacted the hospital numerous times and each time the group has been told that the McDonald’s restaurant is closed, although the cafeteria has recently reopened.

“In place of artery-clogging burgers and shakes, the hospital can now expand its offerings of healthful, affordable, plant-based meals,” says Susan Levin, M.S., R.D., of the Physicians Committee. “Ben Taub Hospital can become a leader in bringing down Houston’s high rates of diet-related diseases.”

Bandana Chawla, M.D., of Houston, has twice testified before the board of trustees for Ben Taub Hospital/Harris Health System. Representing the 119 Houston-area members of Physicians Committee, Dr. Chawla recommended that Ben Taub Hospital focus on providing and promoting healthful plant-based meals to comply with a policy issued recently by the American Medical Association. Scientific studies show that plant-based diets—fruits, vegetables, beans, and whole grains—can help people lower blood pressure and prevent or even reverse diabetes, among other benefits.

The Physicians Committee sponsored two hard-hitting billboards that in April 2017 were posted near Ben Taub Hospital’s parent company, Harris Health System. The billboards parodied McDonald’s slogan and were timed to get the attention of the board of trustees for Ben Taub Hospital/Harris Health System ahead of the trustees’ meeting on April 27. Dr Chawla testified at the board meeting in April and again in October to echo the billboards’ urgent public health message.

In 2014, the Physicians Committee obtained the McDonald’s contract with Ben Taub Hospital/Harris Health System through the Texas Public Information Act and discovered that the hospital had a “percentage rent” agreement with the fast-food chain. This means that the more unhealthful food sold to staff, visitors, and patients, the more money the hospital made.

Costs are a concern to safety net hospitals like Ben Taub, but St. Joseph Health System in Sonoma County, Calif., reports, “Vegetarian entrées cost about 50 percent less than meat entrées.” The hospital projects saving $5,000 a year by serving more meat-free meals. A recent study published in Journal of Hunger & Environmental Nutrition, finds that omnivores can save $750 a year by simply switching to a plant-based diet. 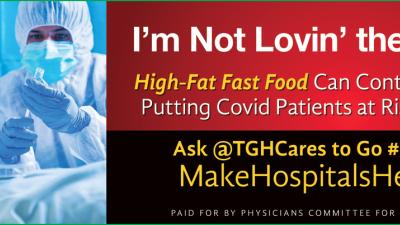 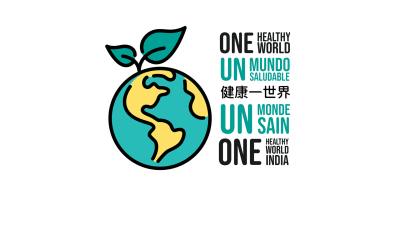 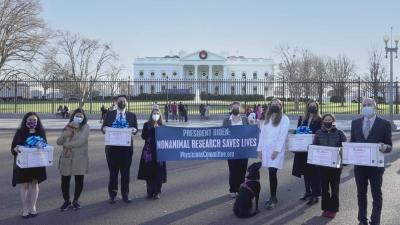