LINCOLN, Neb.—Two billboards that directly address Governor Ricketts will be installed the week of Nov. 23 near the governor’s residence, and they will remain posted until Dec. 20. The illuminated billboards are located at 25th and Randolph Streets and at 1501 South Street, close to both the residence and the state capitol. Sponsored by the Physicians Committee—a national nonprofit of 12,000 doctors, including Nebraska physicians Amanda McKinney, MD, Jean L. Grem, MD, FACP, and 32 others in the state—the billboards confront the governor with the message, “Governor Ricketts: Can Nebraska Switch to a Safer Food Supply Like Beans Over Beef? PromotePlantProtein.org!”

The billboards, which are 10 feet, 6.5 inches by 22 feet, 9.5 inches, show two farmers in a field of edible beans, a local crop that provides plant-based protein. The Omaha World-Herald reported that Nebraska is among the country’s top producers of dry edible beans like the great northern and pinto varieties.

“The transition to plant-based protein is already underway, driven by consumer demand, but this health-promoting trend needs the support and assistance of Nebraska’s government,” says Susan Levin, MS, RD, director of nutrition education for Physicians Committee. “With incentives from the state, farmers could increase acreage of edible beans, and other high-protein crops, while decreasing livestock production.”

Consumers in Nebraska and elsewhere are increasingly embracing plant-based protein products like veggie dogs and veggie deli slices. These products are moneymakers for the companies that manufacture them. As consumer demand rises, food companies are ramping up production of plant-based protein products. According to the Indianapolis Star, Greenleaf Foods is building a $310 million facility in Indiana to produce plant-based protein including veggie sausage. The facility is expected to hire about 460 workers in Indiana, and the state announced that it would support the project through grants and tax credits.

In February, great northern bean and popcorn production accounted for two of the four products for which Nebraska is rated first in the USDA’s Top National Rankings. As demand increases for plant-based protein, the profitability of dry edible bean production is also increasing.

"The current public health emergency highlights the need to transition the food production system away from animal agriculture," Dr. McKinney says in the complaint. "This is especially urgent since meat products increase the risk of chronic diseases, including those that have helped make COVID-19 so deadly."

Patients with high blood pressure have twice the risk of dying from the novel coronavirus, according to a study published in the European Heart Journal. Studies show that affordable, plant-based options can help people prevent and even reverse diabetes, heart disease, and high blood pressure, among other conditions.

According to the Lincoln Journal-Star, new coronavirus cases continue to occur in Nebraska. “The Nebraska Department of Health and Human Services reported 1,574 new cases statewide Sunday for a total of 83,969. The number of deaths in the state linked to the disease remained at 703.” The Physicians Committee is asking the NDHHS for more information on current outbreaks, and how many new cases are associated with slaughterhouses.

By contrast, one of the most profitable manufacturers of plant-based protein, Impossible Foods, reports zero coronavirus cases at its facility in California.

For a copy of the billboard artwork or an interview with a Physicians Committee expert, please contact Leslie Raabe at 443-534-5803 or lraabe [at] pcrm.org. 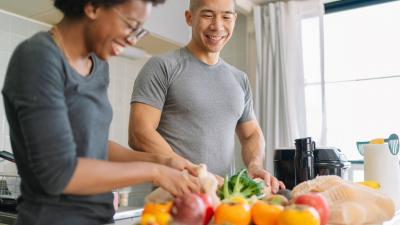 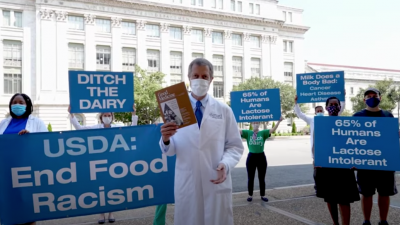