LINCOLN, Neb.— The Physicians Committee—a national health nonprofit with 17,000 doctors including 35 in Nebraska—has written to the new governor of Nebraska, Jim  Pillen, urging him to phase out at least one of his own industrial swine facilities in order to reduce harmful methane emissions and to conserve water. Gov. Pillen should also provide support and funding for farmers who wish to transition from raising livestock to growing water-wise crops such as hazelnut trees or pulse crops.

“It’s important for the governor to increase support for Nebraska farmers who are growing beans, sunflowers, pecans, apples, and other crops that require less water compared to large-scale livestock operations,” says Anna Herby, DHSc, RD, CDE, a spokesperson for the Physicians Committee. “Due to Nebraska’s drought, many ranchers have reduced their herds, and they should get government assistance if they wish to transition to growing lentils and other crops that use water more efficiently.”

Growing trees while phasing out livestock can be especially beneficial to the environment since trees absorb carbon dioxide from the atmosphere and release oxygen for us to breathe. Hazelnut trees, for example, are drought resistant and they can provide income to farmers. Research in Nebraska has shown that hazelnuts can be a high-yielding dry land crop. Apple, pecan, and Christmas trees  can also be grown profitably in Nebraska.

Lentils are grown in Nebraska, and Montana farmer Paul Kanning told Modern Farmer that lentils and other pulse crops are powerhouses of conservation farming because they require very little water, and they improve soil structure and water retention.

Large-scale livestock operations require vast amounts of water, mainly to irrigate the grains and grasses for feed, plus water for drinking and processing. It’s much more efficient in terms of water use to grow crops for people to eat directly. According to the Guardian, growing vegetables uses about 322 liters of water per kilogram, while it takes about 15,415 liters of water to produce one kilogram of beef.

Nebraska is a major producer of beans and other sources of plant protein, which are increasingly popular with consumers and can be moneymakers for farmers. According to the Independent, Nebraska farmer Eric Thalken supplies his crop to Puris, which produces pea protein and is a subcontractor of Beyond Meat, a company that produces plant-based “meat.” Puris told the Independent it has increased production of peas in Nebraska by 81% since 2019 and expects to see more growth in the state.

Federal funds are now available for climate-smart farming practices through the Inflation Reduction Act (IRA). The IRA provides a whopping $19 billion “to support farmers and ranchers in adopting and expanding climate-smart activities and systems,” according to the U.S. Department of Agriculture (USDA). During the USDA’s official comment period, the Physicians Committee argued that funds are urgently needed for farmers who wish to transition from livestock to climate-smart crops—including farmers in Nebraska.

Due to strong consumer demand for plant protein, many farmers are voluntarily phasing out animal agriculture. For example, Carl Taber of Trumansburg, N.Y., phased out his dairy operation and now grows high-demand crops like chickpeas. In Wisconsin, dairy farmer Paul Jereczek is planting hazelnut trees in case his dairy operation fails to provide sufficient income. In North Carolina, the buyout program was extremely popular with farmers who wished to transition from large-scale swine operations to growing crops.

According to the U.S. Environmental Protection Agency, Nebraska has about 1,540 Concentrated Animal Feeding Operations (CAFOs). These large-scale livestock operations contribute to climate change by producing methane, a powerful planet-warming gas. In a recent study, one cattle feedlot produced large enough plumes of methane to be detected by satellites. 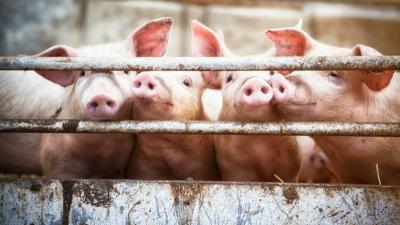