The Physicians Committee is petitioning the Federal Trade Commission, which regulates advertising, to stop the National Cattlemen’s Beef Association from placing deceptive “Beefing Up Sustainability” advertisements that downplay the beef industry’s impact on the climate crisis. The advertisement has appeared in The Wall Street Journal and The Washington Post.

NCBA is a trade association that “works to advance the economic, political and social interests of the U.S. cattle business.” It receives money from the Beef Checkoff, which is overseen by the U.S. Department of Agriculture and is designed to stimulate beef sales and consumption.

The advertisement incorrectly states, “Beef’s environmental footprint may drive headlines, but the truth is, eliminating beef is not a realistic or impactful solution for climate change.”

But the FTC petition cites research from the World Health Organization that says, “Reducing livestock herds would also reduce emissions of methane, which is the second largest contributor to global warming after carbon dioxide.”

“NCBA’s advertisement is contrary to abundant scientific evidence and deceptive on its face,” says the petition. “The Physicians Committee therefore requests that FTC permanently prohibit NCBA from disseminating, or causing the dissemination of, any advertisement claiming that beef is an environmentally sustainable food.”

A study published in August in the journal Nature Food that evaluated more than 5,800 foods and ranked them by their impact on the environment found that beef has the largest carbon footprint.

According to one climate change calculator, eating 75 grams of beef—a typical fast-food hamburger—daily for a year contributes greenhouse gas emissions equivalent to driving a car 7,196 miles—that’s crossing the United States about 2.5 times. Eating 150 grams of beans—about a third of a can—daily for a year is equivalent to driving a car 93 miles.

The Physicians Committee also wrote to the Secretary of Agriculture: “When you began your second appointment as Secretary of Agriculture, you committed to focusing on climate-friendly agricultural practices,” wrote Susan Levin, MS, RD, CSSD, director of nutrition education, in a letter to Secretary of Agriculture Tom Vilsack. “We ask that you replace these deceptive advertisements with helpful notices that promote replacing animal products for plant-based diets to improve both climate and human health.”

In the letter, Levin cites a report published in The Lancet in 2019 that states that “vegan and vegetarian diets were associated with the greatest reductions in greenhouse-gas emissions.” 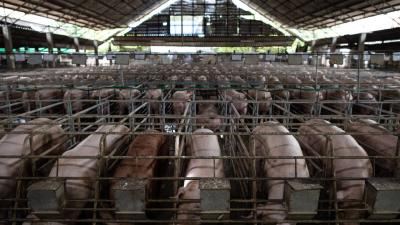