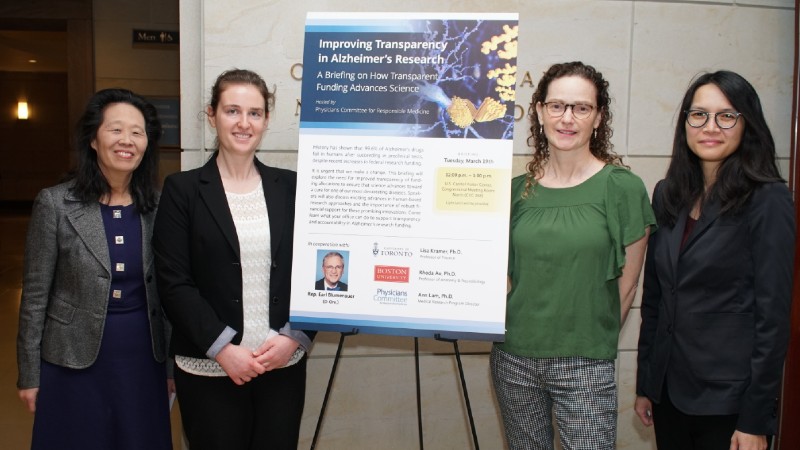 It is Congress’s job to make sure the executive branch—which includes federal agencies like the National Institutes of Health (NIH)—spends its funds wisely. That’s why this March the Physicians Committee hosted a Capitol Hill briefing in cooperation with Rep. Earl Blumenauer (D-Ore.) to highlight the need for improved transparency and accountability in NIH research funding. Building on our 2018 briefing on the promise of human-based approaches in Alzheimer’s disease research, the event focused on Alzheimer’s disease as a case study for why public transparency in research funding is crucial to advancing science.

A growing consensus in the scientific community is that animals do not replicate human biology and are poor predictors of human reactions. The NIH approximates that 95 percent of new medicines shown to be safe and effective in preclinical studies, which are traditionally conducted using animals, fail in human clinical trials. While this translatability issue is prevalent among all areas of research, Alzheimer’s research has an especially egregious failure rate of 99.6 percent. Every year, billions of dollars are funneled into research for Alzheimer’s, and yet we remain without any treatments that can stop or slow the progression of the disease.

An important first step to shifting the research paradigm toward more predictive human-based approaches is that the NIH must begin to clearly track their research that uses human-based and animal-based methods. The agency is already required to record the research studies they fund, but their current system is outdated and does not include these classifications. An updated tracking system would allow researchers, Congress, and the public to have an unbiased measure of the impact of specific methods, and could allow only the most efficient research to continue to be federally funded.

Presenters spoke to a full room of almost 30 congressional staff, nonprofit members, and federal agency representatives, to demonstrate how greater support for human-based approaches could reveal important insight in a faster and less costly manner.

Lisa Kramer, Ph.D., joined us from the University of Toronto to provide an informative overview of the harms that arise to humans from using animal models in drug and disease research and the underlying reasons for the failure of cross-species translation.

Rhoda Au, Ph.D., from Boston University, presented her work with the Framingham Heart Study and how NIH investments in large-scale epidemiological studies provide significant opportunity for discovery, driving home the necessity of data sharing and accessibility.

The Physicians Committee’s Ann Lam, Ph.D., provided another powerful presentation on the research potential of computational approaches in Alzheimer’s disease, circling back to the benefits of transparent research funding in supporting crucial therapeutic and preventative medicine insight.

Alzheimer’s disease research is the starting point, but this reporting system could be used throughout all NIH centers to improve federal funding transparency and accountability. The Physicians Committee is continuing to build on this recent effort to help implement a system that benefits researchers, policy-makers, animals, and patients alike.