You Can’t Contest It: Hot Dogs Are Hazardous for Your Health

Joey Chestnut, who set a world record in last year’s contest after eating 75 hot dogs and buns in 10 minutes, will return but isn’t the only one bingeing on hot dogs. Hot dog sales were up almost 20% during the pandemic, according to National Hot Dog and Sausage Council, and Americans will eat an estimated 7 billion hot dogs between Memorial Day and Labor Day.

It’s a dangerous trend. The World Health Organization has determined that processed meat is a major contributor to colorectal cancer, classifying it as “carcinogenic to humans.” Just 50 grams—about one hot dog—consumed daily increases colorectal cancer risk by 18%.

“Colorectal cancer is the third leading cause of cancer death for both men and women, with an estimated 52,980 persons in the US projected to die of colorectal cancer in 2021,” according to the U.S. Preventive Services Task Force, which recommended earlier this year that screening for colorectal cancer begin at age 45 instead of 50, noting, “Incidence of colorectal cancer (specifically adenocarcinoma) in adults aged 40 to 49 years has increased by almost 15% from 2000-2002 to 2014-2016.”

So ditch the hot dog for a carrot dog this Fourth of July. Or try a portobello burger. Research shows that replacing a daily serving of red or processed meat with one serving of mushrooms lowers the risk of dying from any cause.

And Nathan’s customers can now opt for a  vegan hot dog at several of the restaurant’s New York locations, including Coney Island. 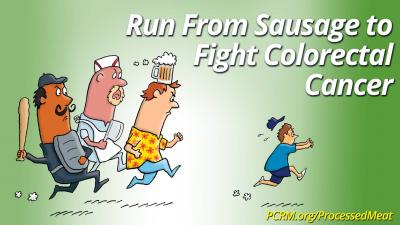