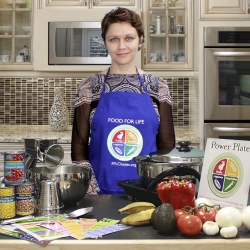 This former engineer and mom of three girls became vegan after watching Forks Over Knives. The movie shattered her belief in the myths that meat and dairy are necessary for optimal health. She began reading anything she could find on the subject. The more she learned, the more she was convinced that a plant-based diet was the best way forward for everyone. It is not only good for your health but is also a way to be kinder to animals, to people, and to the planet. After learning to cook vegan food for her family, Nerma organized vegan cooking classes at her local church and also began sharing her recipes via the "VegStart" Facebook page.

Serving cities and surrounding areas of Peoria and Bloomington/Normal