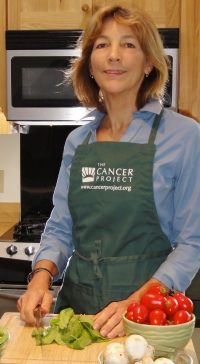 MiMi had a life altering event when her husband died of cancer. Thus began her quest to find a connection between diet and disease. MiMi returned to school and studied Culinary Arts at Johnson & Wales University. She has completed marathons, trained in Yoga and Tai Chi, and as a result, started to investigate vegetarian foods. She began to work as a personal chef for high profile clients with strict dietary concerns which eventually led MiMi to choose a plant-based diet for herself. In 2011, MiMi completed a certificate course in Plant Based Nutrition from Cornell University and shortly afterwards, began teaching the Food for Life nutrition and cooking classes in her community.