This class is about making a qualitative shift in the food we eat, NOT the quantitative. We don't restrict but choose the right food.

This course is a series and will run 5 consecutive Wednesdays from 4:00pm to 5:30pm CST starting on January 5th. Weekly topics are as follows:

During this class you'll experience a supportive environment with fellow students, receive dozens of strategies and recipes that will assist in losing weight and improving your health. It is strongly recommended you identify an accountability partner such as a friend or significant other to go through the program with you .

Life-time coaching from the instructor is included in your ticket price to support your weight loss goals!

Today, Mark teaches whole food, plant-based cooking, runs an employee wellness program, does health coaching, and partners with a vegan travel company cooking delicious no-oil whole-food plant based meals for travelers. You can learn more about Mark at www.letseatgreat.com or his check-out his vegan trips at www.vegjauntsandjourneys.com 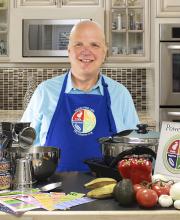