On Feb. 14, 2022, Neuralink posted a statement to its website filled with factually incorrect and misleading statements about the treatment of animals in experiments funded and overseen by the company and carried out at the University of California, Davis.

The company’s statement does not change the fact that monkeys used by Neuralink at UC Davis had portions of their skulls removed and devices screwed to their heads, nor that Neuralink used a substance called “BioGlue,” which was not approved for use in these experiments and has been widely known to be toxic to nerve tissue since at least 2001. BioGlue came into contact with the surface of at least two monkeys' brains, causing damage and hemorrhaging; one monkey suffered for days after this damage.

Neuralink claims that the animals it uses are never forced to participate in any training task, but no animal would willingly allow an experimenter to cut a hole in his skull and implant a device. Further, the experiments’ protocol called for restraining monkeys against their will in a chair restraint for up to five hours per day. If an animal didn't become "acclimated" to restraint, the protocol called for a steel "head-post implant" to be affixed to the animal's skull in order to forcibly hold the animal's head in place.

Neuralink’s statement fails to acknowledge the significant pain and distress experienced by monkeys used and killed at UC Davis. In some cases, the animals suffered for months before they were euthanized, according to veterinary records released to the Physicians Committee in 2021.

Neuralink continues to conduct experiments on animals at its facilities in California and Texas.

The Physicians Committee is urging Neuralink to take the following proactive steps:

Specific Claims by Neuralink and Our Responses

RESPONSE: This claim is demonstrably false. Even by the weak standards of the federal Animal Welfare Act, UC Davis is a habitual violator of the law. In 2018, while Neuralink was funding primate experiments at the university, seven infant primates at UC Davis died due to poisoning caused by the negligence of university employees. In 2019, an infant primate became entrapped in an outdoor enclosure and was euthanized after suffering in the heat that reached 102 degrees Fahrenheit. The university was also cited for 24 violations of the federal Animal Welfare Act between 2013 and 2019, according to inspection reports from the U.S. Department of Agriculture (USDA). Lastly, in 2018, UC Davis was forced to pay a fine of $5,000 for violating the Animal Welfare Act. In addition, veterinary records made available to the Physicians Committee following a public records lawsuit reveal numerous apparent Animal Welfare Act violations that were never reported by UC Davis or noted by the USDA.

CLAIM: Rhesus macaques at UC Davis “may have happened” to lose fingers “from conflicts with other monkeys,” but that is normal because monkeys “resolv[e] conflict through aggressive interactions with one another.”

RESPONSE: Records kept by UC Davis show that staff believed some incidents of trauma were self-inflicted, revealing poor animal care and likely psychological distress for the animals. Also, aggressive behavior is a common response by rhesus macaques and other nonhuman primates when they are confined to small, stressful environments like those in laboratories run by UC Davis and Neuralink. These artificial environments do not allow monkeys to develop and live in their normal social hierarchies. In addition, monkeys facing aggressive behavior are not able to flee their aggressors due to confinement in pens or cages. In support of its claim, Neuralink directed readers to a nearly 30-year-old report written by staff at Yerkes National Primate Research Center, a laboratory with a long history of federal animal welfare violations, including 37 incidents between March 2018 and April 2021. Animal care practices can and do have a significant impact on the severity of injuries and trauma experienced by primates in laboratories.

CLAIM: “[S]ix animals were euthanized at the medical advice of the veterinary staff at UC Davis.”

RESPONSE: This statement fails to acknowledge the prolonged suffering experienced by those six monkeys as well as the monkeys who were eventually used in “terminal” (i.e., fatal) procedures. In some cases, the animals suffered for months as a direct result of the invasive procedures that were performed on them as part of Neuralink’s experiments. Here are notable examples:

CLAIM: One monkey was “euthanized” following a “surgical complication involving the use of the FDA-approved product (BioGlue).”

RESPONSE: UC Davis veterinary records make it clear that BioGlue was found on the brains of two monkeys after it seeped through the holes made in the animals’ skulls, yet in its statement Neuralink appears to only refer to the second animal. Also, while BioGlue has been approved by the Food and Drug Administration (FDA), the agency’s Summary of Safety and Effectiveness (SSED) document for BioGlue contains a clear boxed warning that the product is not safe for use in applications where it comes into contact with nerve tissue. For this reason, BioGlue was never approved for use on monkeys in the Neuralink experiments conducted at UC Davis, and any personnel who used this substance were grossly negligent. Here is what happened to the two monkeys:

CLAIM: “Neuralink has never received a citation from the USDA inspections of our facilities and animal care program.”

RESPONSE: While true, it is misleading. Compassionate people would like the laws governing the use of animals in laboratories to forbid cruelty, but that is simply not the case. Research facilities like Neuralink are subject to incredibly weak federal laws and rules. Under the Animal Welfare Act, no experiments are prohibited—including those that inflict pain. The law is primarily a husbandry statute that regulates the size of cages, cleanliness, and food and water. In addition, the USDA, which is supposed to enforce the Animal Welfare Act, was cited by its own inspector general for closing investigations involving grave violations, including animal deaths and serious repeat violations; failing to properly apply financial penalties, reducing fines by an average of 86 percent; and wasting resources by conducting inspections at facilities that did not house animals covered by the Animal Welfare Act. In February 2019, The Washington Post reported: “USDA inspectors documented 60 percent fewer violations at animal facilities in 2018 from the previous year. …The drop in citations is one illustration of a shift—or what critics call a gutting—in USDA’s oversight of animal industries.” In May 2021, Science reported that “USDA now only partially inspects some lab animal facilities, internal documents reveal,” further revealing the agency’s low standards.

RESPONSE: AAALAC is a private organization that charges laboratories fees for accreditation. AAALAC’s Council on Accreditation is made up of people employed by the very research facilities the organization is supposed to oversee, including a lead veterinarian at UC Davis. Historically, habitual violators of the Animal Welfare Act are routinely awarded accreditation by AAALAC. Further, AAALAC visits accredited facilities only once every three years.

CLAIM: Monkeys used in Neuralink experiments “volunteer” for data collection, only those monkeys who are “comfortable” are used, and “If an animal chooses not to participate in a training task, they are never forced to do so.” 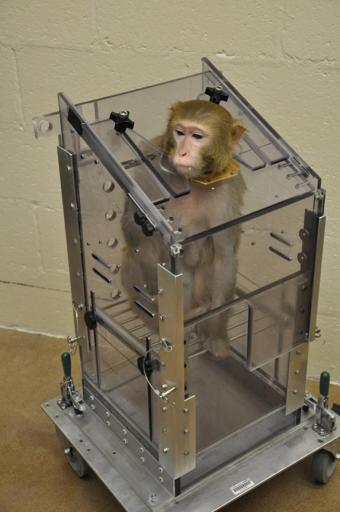 RESPONSE: Nonhuman animals who are bred and held in a laboratory environment cannot provide any meaningful expression of informed consent or “volunteer” for any of the procedures being performed on them. However, it defies common sense that if they had this capability, animals would readily sign up for procedures that cause them immense suffering and even death. Further, internal records from the Neuralink/UC Davis experiments make clear that animals are physically restrained and forced to participate in the procedures. A nonhuman primate “restraint chair” with a neck plate, like the one pictured below, was utilized for up to five hours per day to physically restrain monkeys.

Experimenters wrote that “[i]n the event that an animal is unwilling to voluntarily put its head up through the neck plate of the box chair…we would like the option to sedate the animal…and have the animal fitted for a traditional primate collar. The collar would only be used as an aid to assist and bring the animal’s head above the neck plate.” After the monkey’s head is brought up through the plate, their head is then restrained using “molded pad assemblies.” If these assemblies are insufficient to completely immobilize the monkey’s head, then they will use a “head-post implant,” which is a steel post that can be mounted to the animal’s skull with titanium screws. These experimental techniques make it clear that none of the monkeys are willing participants.