Barnard Medical Center is closed, but our physicians are seeing patients through telehealth visits. Call 202-527-7500 for more information. | Learn More about COVID-19 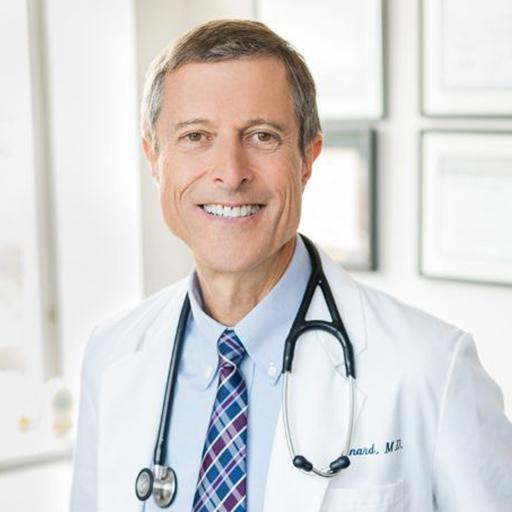 Neal Barnard, MD, FACC, is an Adjunct Professor of Medicine at the George Washington University School of Medicine in Washington, D.C., and President of the Physicians Committee for Responsible Medicine.

Dr. Barnard has led numerous research studies investigating the effects of diet on diabetes, body weight, and chronic pain, including a groundbreaking study of dietary interventions in type 2 diabetes, funded by the National Institutes of Health, that paved the way for viewing type 2 diabetes as a potentially reversible condition for many patients. Dr. Barnard has authored more than 90 scientific publications and 20 books for medical and lay readers, and is the editor in chief of the Nutrition Guide for Clinicians, a textbook made available to all U.S. medical students.

As president of the Physicians Committee, Dr. Barnard leads programs advocating for preventive medicine, good nutrition, and higher ethical standards in research. His research contributed to the acceptance of plant-based diets in the Dietary Guidelines for Americans. In 2015, he was named a Fellow of the American College of Cardiology. In 2016, he founded the Barnard Medical Center in Washington, D.C., as a model for making nutrition a routine part of all medical care.

Working with the Medical Society of the District of Columbia and the American Medical Association, Dr. Barnard has authored key resolutions, now part of AMA policy, calling for a new focus on prevention and nutrition in federal policies and in medical practice. In 2018, he received the Medical Society of the District of Columbia’s Distinguished Service Award. He has hosted four PBS television programs on nutrition and health.

Originally from Fargo, North Dakota, Dr. Barnard received his MD degree at the George Washington University School of Medicine and completed his residency at the same institution. He practiced at St. Vincent’s Hospital in New York before returning to Washington to found the Physicians Committee.

This site does not provide medical or legal advice. This website is for information purposes only. Due to privacy concerns and the insecure nature of e-mail, please do not send medical, insurance, or financial information via e-mail. Full Disclaimer